A few weeks ago, I asked the question: how do you perceive editions including Apocrypha of traditionally Evangelical Protestant translations of the Bible? I got very little response. Yet the issue remains: two major Evangelical translations now feature editions with Apocrypha: The English Standard Version Bible with Apocrypha (Oxford University Press, 2009) and the New Living Translation Catholic Reference Edition (Tyndale, 2003). The NLT edition features books included in Catholic bibles and places them in the order they appear there. The ESV edition features books of the Catholic and Orthodox bibles, set aside in an “Apocrypha” section after the Old and New Testaments.

I have recently managed to obtain copies of both of these and read large portions. Here are my initial thoughts: 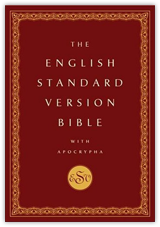 English Standard Version Bible with Apocrypha
The translation of the Apocrypha for this edition was commissioned by Oxford University Press under permission (but without the involvement) of Crossway, which developed and owns the rights to the ESV. It was competed under the guidelines set forth for the ESV and was adapted and updated from the Apocrypha of the 1977 edition of the Revised Standard Version, just as the rest of the ESV was.
Pros: This is a very comprehensive translation of the Apocrypha because it (like the RSV and NRSV) include the books and book expansions found in the Catholic and Orthodox canons. Oxford did a very good job putting it together. The text is a great size, as well as a great font (Optima, usually only used in editions of the TNIV by Zondervan). The paper is opaque enough for easy reading, though not as opaque as the NLT below. Combined with other elements signature of the high quality of Oxford bibles (including some very nice maps in the back), it is a very nice editon.
Cons: As with the rest of the ESV, this is highly literary and also essentially literal, this either may be perfect for you or the furthest thing from your cup of tea. It is quite readable, but its sophisticated style of language may put some off. Great with poetry, it can range from enriching to tedious when used in narrative.

New Living Translation: Catholic Reference Edition
The translation of the Apocrypha in this version, despite the title, did not involve any Roman Catholic scholars. Surprise! It is a 2003 update to the 1996 NLT (before the 2004 revision).
Pros: This is the most readable rendering of the books of the Apocrypha that I have ever read. The story of 1 and 2 Maccabbees really comes alive in this rendering. If someone wants to read through these books and other deuterocanonical books, this is a real pleasure read. The edition itself has a more opaque paper than I was expecting, and the fact that it is one of the few editions of the NLT in only black-letter is a major plus for me.
Cons: This is not as expansive as the ESV’s Apocrypha, being only the books of the Catholic Bible. Also, some might be put off by the fact that it is a somewhat simple, dynamic-equivalent translation and not “literal” like the ESV, RSV, and many other translations of these books. Also, the manufacturing is a bit cheap, but not outstandingly so.

My name is Jacob, and I’m a writer, artist, and Anglican ordinand. I’ve been on a long journey for over twenty years, searching out “the ancient paths… where the good way is” (Jeremiah 6:16). Here you’ll find my many musings on art, imagination, liturgy, and Christian spirituality. Walk with me for a bit of the journey.

All content, unless otherwise noted, is copyright © 2004-2020 by Jacob A. Davis. All rights reserved. Quotes may be sourced with proper attribution.

Unless otherwise noted, Scripture quotations are from the New Revised Standard Version Bible, copyright © 1989 the Division of Christian Education of the National Council of the Churches of Christ in the United States of America. Used by permission. All rights reserved.